The original interactive show "The Long Way to the Stars" will once again take you amidst the stars in May, as part of the programme of Plovdiv - European Capital of Culture. In this non-traditional performance, science meets the theatre to offer the viewer new knowledge and to give them food for thought for the future of mankind.
The performances in Bulgarian will take place on May 15 (Wednesday) from 19.00 at the French Cultural Institute in Sofia and on May 17 (Friday) from 19.00 at the Limacon Event Center in Plovdiv.

"The Long Way to the Stars" is the work of Arte Urbana Collectif Association, Forum Democritus Association and Jet Propulsion Theatre, and behind the project are the names of Andrea Brunello, director and screenwriter of Jet Propulsion Theatre - Italy, Dr. Vladimir Bozhilov from the Department Astronomy at the Faculty of Physics of Sofia University "St. Kliment Ohridsky” and Dimitar Uzunov, director, screenwriter and actor from Famille Mundi - Paris and Arte Urbana Collectif - Sofia, intertwine a colourful cocktail of science, theatre and stand-up performance.

A year after Elon Musk sent his car into space with a rocket and a little more than 40 years after The Delyo Haidutin song sounds in space, anyone curious can learn about the possibilities of modern science and the steps forward to previously unattainable goals. Apart from being spectators of the performance, you will also be able to participate as participants in the workshop on "Creative Storytelling" lead by Dimitar Uzunov in Plovdiv (May 16, 18.00, Limacon Event Center) and Sofia (May 22, 19.00 French Cultural Institute). Dimitar Uzunov's workshop was included in the top 10 of the best creative events in London last September. In June, a workshop on "Communication of Science" is planned, led by Dr. Vladimir Bozhilov, and the dates and locations for Sofia and Plovdiv are to be announced soon. More information about the events can be found on the official Facebook page: www.fb.com/thelongwaytothestars/

Meet the scientist John Ivanov with roots in the bohemian aristocracy and the eccentric presenter Denesh Nagy, who cross swords in the debate "The Present on Earth or The Future in Space." In a busy talk show, you will be able to learn details about when we will be able to reach the Martians and whether life on earth can be a song if we make a joint effort, as well as curious details from the personal lives of the two characters.

If you want to take part in the decision-making for the future of humanity, welcome to the shows /in Bulgarian Language/ on May 15 (Wednesday) from 19.00 at the French Cultural Institute in Sofia (address: https://goo.gl/a5x91L) and on May 17 (Friday) from 19.00 in Limacon Event Center in Plovdiv (address: https://goo.gl/oe1Sd2). Tickets for the performances and the events throughout the year can be purchased online at: http://www.arteurbanacollectif.com/the-long-way-to-the-stars.html. After the performance you will have the floor for a discussion with the project team.

Dimitar Uzunov is a theatre director, screenwriter and producer. He holds a MA in Applied Theater Sciences from the University of Paris 8. He has also studied acting, theatre directing and theatre management at Brooklyn College (CUNY). In 2008 he founded the theatre company Famille Mundi in Paris and has been its artistic director ever since. He is a co-founder and co-leader of Arte Urbana Collectif, which produces and organizes various events in Bulgaria and Europe. He is the organizer of the Summer Scriptwriting Base, an international educational forum for screenwriting for various arts and creative industries. SSB brings together every summer for ten intensive days with lectures and workshops participants, lecturers and mentors from around the world. He is the director and screenwriter of eight theatre productions in France and Bulgaria and numerous multimedia stories. Dimitar Uzunov regularly gives workshops for storytelling, acting and directing (France, Bulgaria, Great Britain, USA, Egypt, Lithuania and Azerbaijan).

The project is part of the official programme of Plovdiv 2019 - European Capital of Culture and is implemented with the support of the Culture Directorate of Sofia Municipality. Representing the University of Plovdiv and USB-Plovdiv, the coordinator and co-organizer of the events in Plovdiv is Assoc. Prof. Dr. Todorka Dimitrova, Scientific Secretary of USB-Plovdiv. The media partner of the project is the Bulgarian Science magazine. 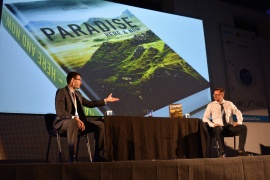