The people behind the event are Verworner-Krause-Kammerorchester from Munich; Dead Merkels (Bulgaria/Germany/UK) and the Roma Ismail Band; jazz musicians from the Kristian Jelev Trio; the renowned percussionist Guido May and the young band Bad Kids to the Back; young composers from Bulgaria, Germany and Latvia, whose work will be performed by a Bulgarian quartet.

There are workshops for talented children from Plovdiv, a master class with Guido May, and a workshop of creative composition for teenage musicians with Alexander Mathewson and Martinš Baumanis.

7 September 2019, 6pm, at the Small Basilica – The Counterpoint Quartet Concert.

8 September 2019, Bee Bop Café at 7pm – Jazz evening at the Bee Bop Café with the percussionist Guido May, the band Bad Kids to the Back, and Kristian Jelev Trio.

Accompanying programme: 8.09 / 3pm – a master class with Guido May (ar the Rehearsal Hall of Dom na Naukata i Tehnikata at 1 Gladstone Str.)

Accompanying programme:  9.09 / 11am – a workshop for children from Stolipinovo with Guido May (at Ceremony Hall in Stolipinovo District at Krayna Str.)

Tickets on the spot and online from Eventim.

Mārtiņš Baumanis was born in 1992 in Riga, Latvia. He describes himself as a sound explorer and uses his voice, electronics and piano, as well as other instruments in his efforts to create meaningful combinations of sounds – as a composer and performer. For more information: www.soundcloud.com/baumijs.

Born in 1990 in Greifswald, Class grew up in Rostock on Germany's North Sea coast. He studied Musicology, Jazz guitar and Composition. Active as a musician, composer, producer and DJ, he writes both acoustic and electronic music for different instrumentations – from solo violin to punk band, from tuba to symphony orchestra.
For further information: www.claaskrause.com.

Alexander Mathewson is a Scots-Bulgarian composer and musician born in Plovdiv, Bulgaria in 1992. He lives and works in Munich, Germany, where he writes music for orchestra, theatre, chamber ensembles and bands. He is active as both a composer and as a performer in classical, jazz, rock, pop and other music genres. More information: www.alexandermathewson.com.

Born in 1985 in Neubrandenburg (East Germany), he grew up in Bavaria after his family fled to West Germany. He writes music for ensembles, orchestra, bands, as well as film soundtracks. He is also active as a Jazz pianist – both as a soloist and as a band member.

Born in Sofia, Bulgaria in 1991, Svetlin Hristov grew up in the northern Bulgarian city of Ruse on the Danube river. He graduated from the Pancho Vladigerov National Music Academy in Sofia, as well as from the P.I. Tchaikovsky Conservatoire in Moscow – in piano, composition and orchestral conducting. An extremely well-rounded and experienced musician, he has worked in many different contexts, including musical productions, symphony orchestra concerts, solo piano and chamber music performances.

Maximilian Zimmermann is a German-Austrian composer and conductor born in 1995 in Munich, Germany. Currently he is completing a Master's degree in composition with Prof. Jan Müller-Wieland at the Munich University of Music and Performing Arts. Apart from composing, he also works as a choir and orchestra conductor, as well as being the musical assistant of one of Munich's leading contemporary music ensembles. More information: www.facebook.com/pg/mzimmermannmusic/about/.

The Counterpoint Quartet is made up of current and former students of Professor Pancho Vladigerov National Music Academy in Sofia, Bulgaria and will be performing young composers‘ pieces at Plovdiv Fresh Music Festival 2019. The Quartet consists of clarinet, violin, piano and cello, akin to the famous Quartet for the End of Time by Olivier Messaien – an ensemble that offers composers a rich palette of sound and the opportunity to experiment with extended playing techniques.

The drummer Guido May is an established name on both the European and global Jazz scene. Apart from being a mainstay of Pee Wee Ellis' band, Guido May regularly plays alongside musicians such as Fred Wesley, Maceo Parker, Jason Rebello, Antonio Farao and many others. His performance as part of the Plovdiv Fresh Music Festival will be the first time he has played in Bulgaria, where he will be supported by a band of local musicians. He will also give a drumming master class as part of the festival – a great opportunity for young musicians to learn from his diverse and extensive experience.
For more information: www.guido-may.com.

Bad Kids To The Back

The young funk band Bad Kids To The Back is made up of Nikola Panchev (guitar), Elena Ilcheva (bass guitar, vocals), Niki Hristov (piano) and Zhivko Ivanov (drums). Still at school, these young musicians shine nonetheless with their playing abilities, their rhythmic feeling and musicianship. More information: www.youtube.com/channel.

The drummer Kristian Jelev is a mainstay of the Plovdiv Jazz scene. He has played at many festivals all across Bulgaria, as well as abroad. What sets him apart from many other drummers is that he is also an experienced pianist, which can be heard from his fine ear for detail in his drumming. Along with his trio he will perform a selection of his own compositions, along with famous jazz standards and some lesser known, but equally exciting pieces.

The Ismail Band, who will be hosting the event in the Roma quarter, are talented musicians well known for their colourful performances of authentic Roma music. The vocals and the remarkable ornamentation of their music sweeps up the audience and leaves unforgettable memories.

The band led by the musicians and composers Alexander Mathewson and Daniel Scheffels mixes many different influences, which come together to form a homogenous sound. Punk energy rides on a solid New Orleans blues basis, while hip-hop and trap-influenced beats in odd metres bring everything to life. The music is merciless and loving, to dance to and to listen to – all at the same time. More information: www.alexandermathewson.com.

The project is a Creative Ray production. 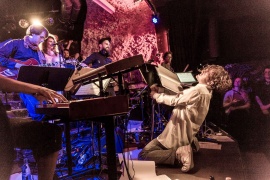 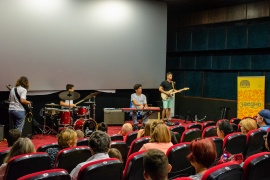 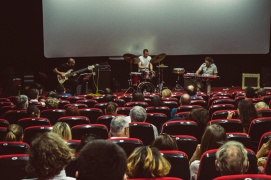 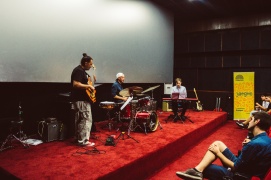