There is a poem by Wislawa Szymborska that I like a lot.

"Twenty-seven bones, thirty-five muscles, around two thousand nerve cells in every one of the five fingertips. That's all it takes to write Mein Kampf or The House at Pooh Corner."

An ethical mainstay of the business of writing. I have been thinking about it a lot. What can the hand write in times of plague? Will a hand turned upside down be capable of finding the right words when disaster strikes? Since the afternoon of the 11th of March, the afternoon when the World Health Organisation declared the pandemic, the afternoon when the globe became less global, the invisible enemy took charge of time, space and speed. Fear took hold of our heads and bodies, locking us up inside our homes. And I stopped being able to write. I still can't.

It wasn't a decision. Nothing happens just like that. Reality is one thing. Fiction is the possibility of having a different one. Of becoming wealthiest. Having two things instead of just one. But when reality advances, unfettered, gaining strength as it goes, like a catastrophe wiping its shoes on the doormat, fiction no longer makes sense.

Since the afternoon of the 11th of March I have been very sincerely locked up at home. And I stopped being a writer. I am not a writer now. Even the window, where I would lean out to channel the thoughts floating around in my mind, no longer makes sense. Can writing be tamed? Should I approach the window? Peek outside to see what? The Ria Formosa that I can't reach. The calling of the storks high up on the chimney tops. The screeching of the peacocks in the wild garden next to the library. Nature advancing and taming what once was human. The storm is here and it is stretching out its long arms, touching everyone and everything. The fright that suspends comes from within and without. Silently. Invisibly. And increasingly bewildering.

My grandmother wrote me a letter. A grandmother concerned about her grandson, instead of the other way round. Staunch in a faith as dependable as the time table, she asked how we and the animals were doing. She spoke to me of the Bible and some of its verses. Of the four horsemen and their tall horses. She wants to save us. However hard I try to find peace and love in my heart, I have not yet been able to bring myself to write back to her.

Since the afternoon of the 11th of March, I have roamed the rooms of this house like a determined gymnast. And touched up the paint on the walls and ceilings. And cooked in a way no great chef has ever done. And I have tried to divert my attention towards anything that is not numbers, statistics, coloured graphs, peaks and plateaus, contradictory forecasts and scientific theories, and away from Tom Moore, aged 99, who is doing 100 laps of the garden at his home in Bedfordshire, and from the teary applause in Leganes for the heroic Nurse Esteban, and from Pope Francis, tracing an indivisibly solitary path across Saint Peter's Square, and from the mass graves filled with unclaimed bodies in the New York suburbs. I have tried and I have failed. On a grand scale. In this millimetric shift of the gaze and the head – "heaven is a millimetre to the side".

Reality remains a clenched fist punching fiction repeatedly and daily. One single thing. Not two. Making us poorer. Paul Celan had warned us about the impossibility of writing after tragedy has occurred. Indifferent to all this, my dog has been taking me for walks through the empty city streets. And I have obeyed him. And I will continue to obey him, grateful. For the daily confrontation with fear and the progress towards freedom. While my dog takes me walking through the empty city streets, I will be a man who makes noise as he walks.

​​And, for the time being, that is saying a lot.

#EuropeAtHome is now in Bulgarian language 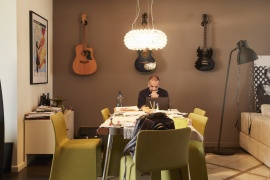 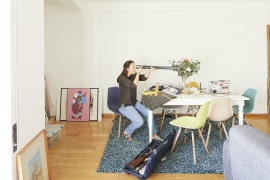 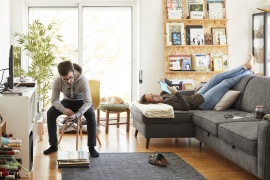 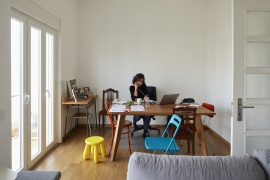 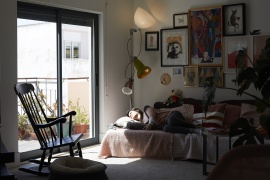