Excerpt from the curatorial text

Digital Ecologies brings on display art works that engage with ecological domains and constitute a constellation of eco-art, of emancipatory art practices and committed aesthetic inventions. They have ethical implications in the age of meta-data and the political economy of valorization of information under post-internet conditions, and in the troubling times of rapid and unpredictable climate change associated with global warming. The exhibition project is a platform to display, but also a laboratory for joint research to invent new concepts, affects and percepts – a space of experiments on how to turn knowledge into practice, and practice into knowledge, with its own temporality.

The project does not aim to contemplate, communicate or reflect the topic of Nature. All of these would apply a kind of imaginary mastery. Instead, it embraces speculative realism to struggle for the real. “We must make use of fictions and abstractions […] to get to a plane where we go from real being to real being and advance through the construction of concepts,”* in this case, concepts of eco-realism. Rather, it displays a constructivist approach and returns to the working conditions of composition to ground some urgent questions, urge us to assume our responsibility and open up a new field of virtuality with its potentialities to construct new concepts of brain and nature that do not work in opposition.

The ethico-aesthetic aegis of Digital Ecologies partially draws on the three ecologies of Félix Guattari – social ecology, mental ecology and environmental ecology – and their ethico-political articulations in the molecular domains of sensibility, intelligence and desire and then on to molar dimensions. “Now more than ever Nature cannot be separated from culture,” writes Guattari. This has turned into a truism, but we need to “kick the habits” and return this obvious truth to its emergency here and now, and re-introduce transversality, which still has to be learned as a practice of ecological awareness, of de-colonizing thought, re-inventing gestures of solidarity in response to environmental variations. Guattari’s ecologies are governed by a different logic from that of ordinary communication, viz., the logic of intensities and engagement in irreversible durations. Digital Ecologies occupies this logic of an evolutive process and its object-oriented endeavors “to forge incorporeal objects” as the focal points of new subjectivities, as they are catalysts of existential change.

Operaismo Naturale: Ecology of the Event takes inspiration from the desire by Deleuze & Guattari to write a philosophy of nature in which any distinction between nature and artifice becomes blurred. The ultimate volume of Philosophy of Nature remains an unwritten project in the body of their collective work, in the channels of their non-linear micro-logic of philosophical ideas. It leaves an unoccupied space for us to speculate, to fabulate, to experiment what and how such a philosophy could be that is inevitably a matter of aesthetics and ethics. The unwritten Philosophy of Nature is a project of naturalist materialism in science-fiction that remains an open work, a threshold for ‘heretic’ ideas in the blurred zone between nature and artifice, or what Michel Foucault called points of heresies, which correspond to Deleuze and Guattari’s “Event-centered singularities” and resonances between them that make up the diagrammatic feature of the plane. Their physical magnitude can unexpectedly take us off in a new direction, where there is no longer a need for speculative unity between nature and spirit or between nature and technology, but rather ecologic modulations of micro brains’ plasticity. The plastic forces operate between the organic and inorganic, between human and non-human. Their plastic method is not so much a transformation of one into the other than the passing of one into the other to anticipate the future of social and politico-aesthetic change.

The project interrogates how the relation between the concepts of plasticity in nature, art and the social can be de-instituted, and thought as abstract machine and concrete plastic forces, plasticity as an aesthetic and social force that can be conceived as plastic forces and organic folds in the multi-layered plateaus of matter.

Zooming in close up into these new cerebral maps (not of the objectified brain of biology), Operaismo Naturale considers the concrete performance of these cartographies as the ecology of the event. The event is a separated aleatory incorporeal point at which the brain individuates itself without subject and becomes an atmospheric event, the inorganic (re)double of the biological brain outside of consciousness, what Deleuze and Guattari defined as plastic availability, drawing on the “plastic specter” of Antonin Artaud that haunts the work of art and the new mentalities that have to be invented between the three ecological registers. The event is the consistency or reality of the virtual, the running vectors of micro-brains at the crossroads of multiple paths. Their collection is the brain-event outside of the organic (of the organ and its flexibilization), the event as an embryonic emergence of new material and social realities and of a natural equilibrium.

Text (excerpt): Dimitrina Sevova (to read the text in full, see the website)

You will find the curatorial text and additional information on the participating artists and the events on the web site of the project: http://digital-ecologies.arttoday.org/index.html

A project of Art Тoday Аssociation, Plovdiv in collaboration with Corner College, Zurich.

The project is part of the program of Plovdiv 2019 - European Capital of Culture. 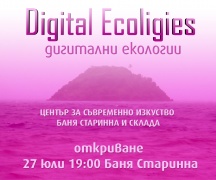