Europe Day will be celebrated in Plovdiv with the first in Bulgaria "Festival of Lights" on 9 and 10 May 2019.

In 2019, Europe Day, May 9, will be celebrated with the "Festival of Lights", coming for the first time to Bulgaria. Its host is Plovdiv - European Capital of Culture 2019. On 9 and 10 of May from 21.30 residents and guests of the city will be able to see how some of the most beautiful facades in the city center "come alive" beneath the colorful lights of the captivating 3D mapping show and five light installations.

In the month of the European elections on May 26, the celebration of Europe Day will be precisely in recognition of one of the basic human rights - to choose. The six art projections will show the everlasting theme through the prism of ancient history of the City of the Seven Hills and the rich world cultural heritage, intermingling past and present.

The 3D Movie 'Together We Choose Our Future' will be shown at the Stefan Stambolov Square, the emblematic building of the Municipality of Plovdiv, accompanied by lighting installations in the Tsar Simeon garden, the water cascade on the stairs of "Angel Bukureshtliev" St. (known as "the stairs of Kamenitsa") and the Ancient Stadium of Philippopolis.

In 2017 and 2018, Europe Day was celebrated in Sofia with large-scale 3D mapping shows on the facades of the National Art Gallery (the former Royal Palace) and the Council of Ministers in Sofia.

Access to the show and installations will be free. To make everyone want to be part of the holiday, the 3D movie will be broadcast several times during the two evenings.

The show can be viewed live from 21:30 on May 9 on the website of the European Parliament in Bulgaria as well as on Facebook via Facebook Live.

Europe Day is a celebration of the European Union, the unity and peace of the old continent. It marks the date when French Foreign Minister Robert Schuman read the historic declaration of unification in Europe. On May 9, 1950, five years after the end of World War II, he called for the unification of French and West German resources in the coal and steel industry to avoid future military conflicts. The "Schuman Declaration" is at the heart of the European Coal and Steel Community, the predecessor of today's EU.

Robert Schuman proposed to create a supranational European institution in charge of managing the industry. The countries, which he addressed had until recently been involved in a devastating military conflict. This day marks the beginning of unification of the countries in Europe and the maintaining of peaceful relations on the Old Continent. The Schuman Declaration is considered to be the basis of today's united Europe, the beginning of the road to a shared community of shared values and common interests.

In 1985, the Heads of member countries of the European Union at a meeting in Milan decided that 9 May would be celebrated as Europe Day. Since then, May 9 symbolizes the striving for unity, peace and prosperity in Europe. In Bulgaria, Europe Day was officially recognized by Decree No 54 of the Council of Ministers of 29 March 2005.

The prestigious "Festival of Lights" is coming to Bulgaria for the first time at the invitation of the European Parliament, the European Commission in Bulgaria and the Plovdiv 2019 Foundation as part of Plovdiv's program as European Capital of Culture. In its 15-year history, the festival has transformed some of the most popular historical landmarks, monuments, streets and squares in the world's capitals into huge lighting installations.

The installations for the festive event were developed jointly with the Bulgarian MP-Studio, winner of numerous European awards for illuminating landmark buildings in Europe and around the world.

Where Ancient Stadium of Philippopolis, Plovdiv Main Pedestrian Street, Plovdiv Municipality, Stefan Stambolov Square, Tsar Simeonova Gradina
Programme Relax
Europe Day 2019 will be celebrated on 9 and 10 May with the "Festival of Lights" in Plovdiv - European Capital of Culture 2019. 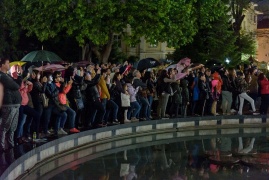