Hijikata and His Double

The performance Hijikata and His Double takes inspiration from the groundbreaking first artistic works of the Japanese choreographer Tatsumi Hijikata (1928-1986), the founding figure of the new performance form, known as Butoh. Although Hijikata became figure of reference for the international art scene, little is known about the appearance of his programatic early works, and only fragmentary footage is preserved.
The performance Hijikata and His Double will present an imaginary reconstruction of fragments of the legendary first works of the Hijikata, partly based on archival research. Thus, the poetry of Hijikata will be transformed into an original work by Meteor, inspired by the techniques of Butoh and the sources from which the Butoh itself has drawn inspiration.

Some of the most influential Bulgarian and Japanese thinkers and artists will join forces to conceive the performance: the philosophers Boyan Manchev, Yasuo Kobayashi and Futoshi Hoshino as well as the creative core of the Metheor group - the director Ani Vaseva and the acclaimed actor Leonid Yovchev as Hijikata himself.

Hijikata and His Double premiere at the State Puppet Theatre - Plovdiv - 20 September, 2019 at 6 pm. The project is part of the FOCUS: Japanese Culture Programme, which is implemented in partnership with the EU-Japan Fest Foundation. The project is implemented by Metheor Association.
Metheor is an art collective, working with stage, visual, textual artistic and critical forms, developing their radical poetics. The central figures of Metheor during its ten-year history are the playwright and director Ani Vaseva, the philosopher Boyan Manchev and the actor Leonid Yovchev. Metheor's projects include 15 written and staged theatre plays and performances, which toured internationally, realised in Sofia, Vienna, Plovdiv, Berlin, Porto, Leipzig etc. They are defined by the group and the interpreters of their work as "theater of disorganization", "inhuman theater" and "theater oratorio" and are based on a strong idea of ​​theater. Each performance of Metheor seeks to invent a unique form based on experimental work withe text and productive critique of theatrical techniques.

The third stage of the project 'Hijikata and His Double' in Tokyo: more information here.

Hijikata and His Double 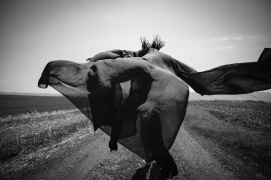